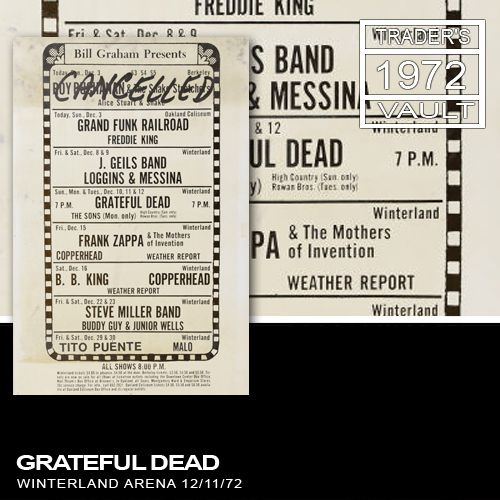 Promised Land, Sugaree, Mexicali Blues, Loser, Me And Bobby McGee, Brown Eyed Women, Beat It On Down The Line, China Cat Sunflower-> I Know You Rider, Box Of Rain, He's Gone, Around & Around, Friend Of The Devil, Playin' In The Band

Other artist(s): GD; Sons Of Champlin

---Thank you Will Boswell and Pat Lee for making your SBD reels available.

---Thank you Jamie Waddell for editing and mastering the SBD.

---Thank you Patrick White for encoding the SBD to FLAC.

---Thank you to all the folks at GEMS.

---Thank you Bob Menke for recording and transfering the show.

---Thank you to all the folks at MOTB.

---Thanks to germain for everything;seeding,encouragement,advice and tutelage.

** some minor mix adjustments when needed **

This was the second show of three. The Grateful Dead were not originally scheduled to play these three shows.

---Promised Land is poorly recorded and mixed on all sources, the sound improves dramatically after it.

---SBD patched for 4 seconds during Me & Bobby McGee.

---SBD patched for 19 seconds during the first verse in China Cat Sunflower.

---SBD patched for 2 minutes and 5 seconds during the China -> Rider transition.

---SBD patched for 4 minuts and 9 seconds during the Playin' jam.

---SBD patched for 10 seconds during the Playin' jam.

---SBD patched for 1 minute and 8 seconds during Dark Star.

---Less than a second of SBD drop out during Tomorrow Is Forever patched.

---The final few minutes of Tomorrow Is Forever through the end of the show is AUD only.

Transferred by
matrix by dusborne

Every now and then, actually fairly often, you come across a Dead song that makes your heart skip a beat and quiver in your chest. And this Dark Star is one of them.

My buddy downloaded Fire on the Mountain onto his phone and it just so happened to be one of those life-changing versions. Ive never been able to find that file anywhere else on the internet and I've searched and searched for it. Nothing.
Reviewer: gr8fuldad73 - favoritefavoritefavoritefavoritefavorite - October 20, 2013
Subject: winterland 72'
epic show epic Dark Star Stella blue.powerful contender for 1972.
Reviewer: Satori70 - favoritefavoritefavoritefavoritefavorite - December 11, 2012
Subject: 40 years ago tonight, It seems like all this life was just a dream . . .
A good board with audience patches, from a great venue, and what a year '72 was ! Fantastic shows throughout Europe, an epic July in Dillon, August in Veneta, and now, back home to Winterland. They would return here again NYE in just a few weeks, but this is the second of a three night triumphant return home, and boy do they nail it. Just check out great versions of really the whole setlist. Honestly, I love Loser & He's Gone, but in the 2nd set Dark Star > Stella are other-worldly as well !

Love the great ballroom sound, and even though according to Bobby, "Pigpen is convalasing from multiple, and serious illnesses, and he will probably be back with us after the first of the year" the band play amazing. Nothing stopping the train this night ! GD'72 @ Winterland ? 5*****

Thanks dusborne, Great Job on a great show.
Reviewer: cortelle - - July 10, 2012
Subject: fav Half Step
this Mississippi Half Step is amongst the finest performances ever of this great song. well worth checking it out.